For lovers of archeology Pompeii is the most famous site in Italy, a average tour of Pompei ruins take 2 hours but you could stay there 1 day. Due to its location along the highway Napoli - Salerno, it can be combined with various other tours and transfers.

One quick glance at the lay-out of the city and a fundamental fact immediately catches one's eye: Pompeii, unlike Herculaneum and ancient Naples, is not the fruit of an organic design of city planners. In the regular town design two atypical nuclei stand out: one, roughly quadrilateral, around the "civil forum" and the other around the tiny "triangular forum" next to the theatres district. To those nuclei is linked the rest of the city which by contrast looks "new": all this enclosed  within solid city walls.
This observation reveals the secret of the origins and development of Pompeii: its port on the mouth of the river Sarno is evidence of its Mediterranean vocation - from the earliest history - with respect to its vast hinterland which in time came to include Acerra, Nola, Nuceria, as the ancient historian Strabo attests.
On a bed of prehistoric lava, Pompeii is founded in the second half of the VIIth century B.C. with an organization effort that presupposes objectives of lookout and defence connected to the nature of the relations between the Greeks and the natives.
The natives, peaceful when first colonized, later matured notions of armed action when the Chalcidenses, who held defensive posts along the sea-coast, threatened to cut off for ever the peoples of Campania from access to the sea. Despite the documented existence of a Doric temple dating from the second half of the VIth century B.C. on the terrace of the triangular forum, and other indications that were held valid until only a few years ago, Pompeii was not a Greek city, even though it had been influenced by Greek culture ever since the most archaic epoch. In the light of the results obtained from the stratigraphic researches carried out in these last years, it appears that Pompeii, at the time of its foundation and its first development, was much more conditioned, politically, by the Etruscans than by the Greeks.
There is also evidence that it was connected to an "Etruscan territory" centred on Capua (Santa Maria Capua Vetere), which comprised large portions of inland Campania and, through the Sarno valley, the Sorrento peninsula. Disconcerting evidence of this has been found at Vico Equense.
Pompeii's commercial vocation upsets completely the former architectural and decorative order, transforms the habits of its inhabitants, generates self-made entrepreneurs and exploiters.
A "vertical section" of the city in the last decades of its life before the 79 A.D. eruption of Vesuvius, would offer a picture - in contrast with the calm of former times - of roads, inns, taverns bustling with people, brothels in full activity, stall keepers in the forum, the amphiteatre cram-full of people, slaves of an irrational passion for sport, always ready for a brawl, walls covered with election slogans in favour of this or that candidate, graffiti with names, quips, love messages everywhere.
House building in the meanwhile was capriciously spreading beyond the walls, it consolidated westwards in dismal phalansteries.  Painting lost its capacity of perspective. The former articulation which can be seen in the vast cycles of paintings of the "Villa of the Mysteries" (Villa dei Misteri), is often reduced to nothing but commonplace and poor quality decoration.
In the last few years every possible effort has been concentrated on restoration but excavations have also been going on the city walls, bringing to light the walls from "Porta di Sarno" to "Porta di Nola" and beyond towards "Porta Vesuvius".
Stratigraphic research work has also been given a substantial boost.
The four-storey building that incorporates the walls, north of "Porta Marina", has been excavated while the diggings at the "House of Julius Polybius" (Casa di Giulio Polibio) have brought to light new and sensational discoveries.
The zones that still have to be excavated in the north-eastern area may hold some more unexpected surprises in store but at this point we can say that the "picture" of life in Pompeii, thanks also to stratigraphic research, has already been quite clearly defined.

The eruption
The eruption of the Vesuvius, which raged from the afternoon of August 24th through to the 26th, were recorded, albeit a few years later, by Gaius Plinius Secundus, who in 79 AD was seventeen years old and staying with his uncle, an admiral in the imperial fleet and a keen naturalist. He was persuaded to narrate the events by Tacitus in two letters when the latter was acquiring material for the second part of his "Historiae".
Those last days of August had been preceded by earth tremors, a common enough phenomenon in Campania that aroused no particular apprehension. But early in the afternoon of the 24th an enormous cloud in the shape of a pine tree appeared and it changed colour continuously.
The admiral was studying the cloud, not knowing its cause, when a call for help arrived from Rectina, the wife of Tascio, who lived at the foot of Vesuvius. She found herself hemmed in by the eruption, with only the sea offering a possible route to safety. The admiral ordered the entire fleet to put to sea, intending to take off as many as possible of the numerous inhabitants along that part of the coast.
During the crossing the ships were covered in the ash pouring out of the volcano, which as they drew nearer the coast became hotter and denser, containing flaming pumicite and lapilli. The force of the eruption was such that the ships could not land and had to sail on the port of Stabiae, four miles to the south of Pompeii.
The admiral went ashore and had dinner as guest of Pomponiano, continuing to scrutinising the spectacle that, with nightfall, had become truly awesome.
There was no let up in the shower of ash, which built up in drifts in the central courtyard of the house, forcing the diners to leave the dining room before they were trapped inside. What is more, the tremors went on unabated, shaking the buildings to their foundations, and everybody chose to stay out in the open, covering their heads with cushions to protect themselves from the storm of scorching particles, rather than risk being buried under falling masonry.
At dawn on August 25th the light of the sun was unable to penetrate the thick veil of soot hanging over the never-ending eruption, while the condition of wind and sea continued to make escape impossible. The admiral was overcome by the choking ashes mixed with sulphurous exhalations and he died along with many other inhabitants of Pompeii. The contorted corpses of some of them have been restored to us in plaster casts, bringing home the excruciating suffering of a death by suffocation from fumes.
During the years the city passed into total oblivion, such that even its name was forgotten. Even in the first years of excavations, which began in 1748, no one was quite sure whether the site was Stabiae or Pompeii, until, as Winckelmann recorded, an inscription came to light which proclaimed unequivocally the name of the Pompeiian colony.
Since then more than two centuries have gone by, and millions of visitors have come to experience one of the most significant legacies of the ancient world, carrying away with them sensations and reflections which may indeed be of use in charting their future lives

The Visit
Porta Marina. The name is modern and indicates that the roads passing through this gate led down to the sea. The gate originally had two arches (one for pedestrian only) made into one barrel vault in opus cementitium (a compound of mortar and stones)
The Antiquarium is a museum which assembles the evidences of the life and the civilisation of Pompeii including the famous casts of the corpses of some inhabitants and animals died during the eruption. We can found other important founds to the Archaelogical National Museum in Naples.
The  Forum  centre of the city, a large rectangular square rich of columns and bases of innumerable statues. 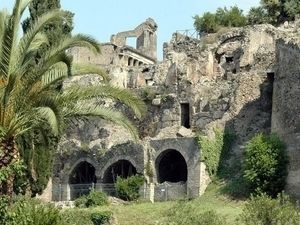 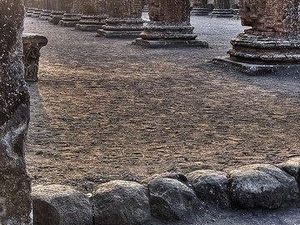 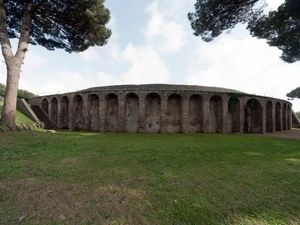 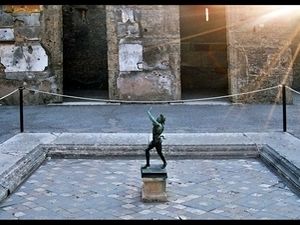 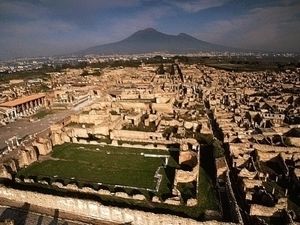 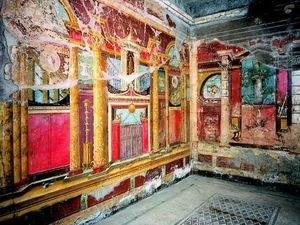 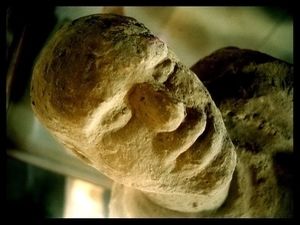 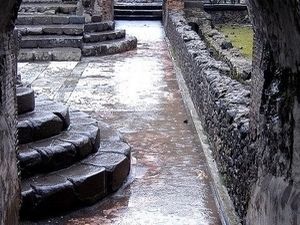 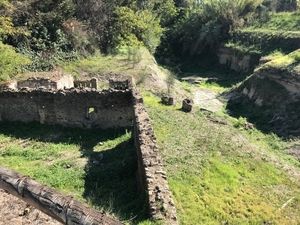 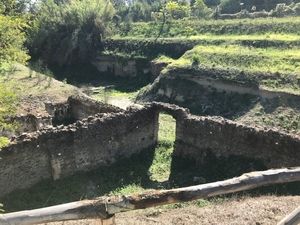 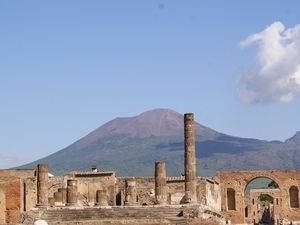 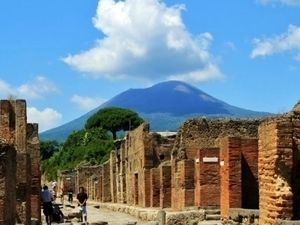